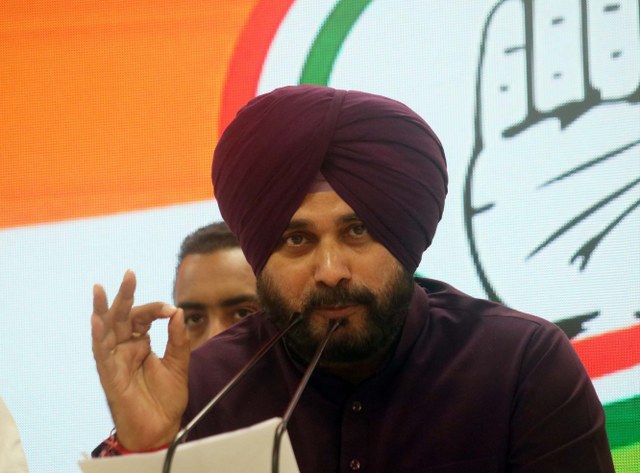 Chandigarh:  Punjab Cabinet minister Navjot Singh Sidhu, who is at loggerheads with Chief Minister Amarinder Singh and was allocated a new portfolio on Thursday, failed to assume his new charge, it was learnt on Saturday.

The rift between the Chief Minister and Sidhu came to the fore once again with the Amarinder preferring to keep Sidhu out of crucial consultative groups that were announced on Saturday to review progress and make changes, if needed, in the government’s flagship programmes and schemes.

Sidhu has been camping in the national capital since Friday to have an audience with the party’s top leadership.

Hours after the first state Cabinet meeting following the Lok Sabha election, the Chief Minister on Thursday rejigged the portfolios of most of the ministers, including Sidhu.

Barring four ministers, there were some changes in the portfolios of all the ministers as a result of the reallocation, which the Chief Minister said would help further streamline the government system and processes and bring more transparency and efficacy to various departments.

The Local Government portfolio was earlier with Sidhu who now has Power and New and Renewable Energy Sources. His other portfolio of Tourism and Cultural Affairs was also taken over by the Chief Minister.

Almost all ministers, except Sidhu, have assumed their new offices, a senior government functionary told IANS.

Since Congress President Rahul Gandhi is on his first trip to Wayanad after his victory from the seat in the Lok Sabha polls, Sidhu is likely to meet Priyanka Gandhi and Ahmed Patel in a day or two, a senior party leader said, requesting anonymity.

He may also wait till Rahul Gandhi’s return to New Delhi, he added.

Sidhu and his wife Navjot Kaur, a former legislator, have not reacted to the media since he was divested of his portfolio.

Taking an indirect dig at Amarinder, widely known as ‘Captain’ owing to his Army background, the cricketer-turned-politician is often quoted as saying “his Captain is Rahul Gandhi”.

Even during the Lok Sabha electioneering, his wife Navjot Kaur said Sidhu had campaigned in Punjab only at the request of Priyanka Gandhi.

A defiant Sidhu, in fact, skipped a Cabinet meeting on Thursday and declared later that he “cannot be taken for granted”. He had said that his department was singled out publicly for the Lok Sabha loss.

This was the first meeting of the Cabinet after the Lok Sabha election, and the Chief Minister set a deadline for the completion of his government’s flagship programmes within six months.

This was the second time in a week when Sidhu boycotted a crucial meeting in evident protest.

Sidhu was not available for comment on Saturday despite repeated attempts.

Missing no opportunity in taking a jibe at Sidhu after the portfolio reallocation, Akali Dal chief and Member of Parliament Sukhbir Singh Badal tweeted: “He has been given ‘power’ (portfolio) so that Sidhu can perform and achieve the same results in rural areas too.”

Badal said the Chief Minister removed Sidhu from the Local Government portfolio citing his performance as the reason for the Congress’ defeat in urban areas in the Lok Sabha election.