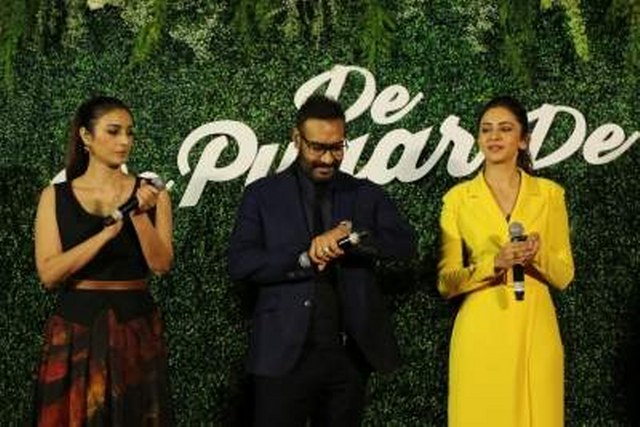 Okay, guys, there is news. Ajay is back to spelling his surname as Devgn’. He confuses me in every film, dropping an ‘a’ as though it was a primetime soap’s fluctuating ratings.

In this film Devgn’s title is not all that is confusing. His 50-year old highly successful London-based executive has abandoned his wife (Tabu, if you please!) and two grownup children who understandably hate their father. He is now pulled into a romance and relationship with a girl half his age — literally. Yes Ayesha (Rakul Preet Singh) is actually 25 to Ashish (Devgn)’s 50. And she has the hots for him even as he tries his best to fob her off.

But she’s soon in his bed, with full makeup on. That’s Rakul Preet Singh for you. Never forgets her war-paint even when the war is called off. Rakul plays the silliest girl-in-love I’ve seen. Ayesha not only chases Ashish(Devgn) down until he surrenders to her demands, Ayesha accompanies Ashish back to India to his ex-wife’s home in an idyllic hill station which looks like a cardboard cut-out infused with unexpected life and vigour.

While the first-half with Devgn being seduced with whammy one-liners and snarky retorts breezes by with an invigorating absence of stereotypical romancing, the second-half brings us the phenomenal Tabu as Devgn’s still-to-be-divorced wife.

This is when I seriously starting seeking signs of splendour in the saga.

And I got it! There is a sequence where the wife Tabu sitting down on the bed with a grim slightly befuddled ex(?) husband has a glorious meltdown wherein she blurts out how she longs for just that one day in her life when she doesn’t have to worry about anyone but herself. The camera (manned majestically by Sudhir Chudhary) loves Tabu’s face in that sequence — it records her angst as though that face, for a few minutes, becomes the map of the human heart.

If you are a Tabu fan, then be warned: the script comes to terms with the logistics and dynamics of her character — an estranged wife who has singlehandedly brought up her two children — quite late in the day. A major part of the plot is adorned with perky Rakul’s over-the-top chirpiness .She is like Jaya Bhaduri in Guddi without the school dress but the skirt is still short. And so is the talent.

It beats me why any man would prefer this annoying child-woman (who confesses she loves to drink and who sits in a prospective bridegroom’s lap to check out whether ‘anything happens’) over the magnificent Tabu.

But then that’s the beauty of the journey undertaken by the human heart. You never know where it is going until you get there. “De De Pyar De” is filled with a kind of wondrous audacity. The dialogues are smart-alecky in the way two tipsy lovers spar over the WhatsApp when they know all along, that their fast-flowing words would fade into daylight.

The performances are interesting as long as the actors are not saddled with underwritten roles, like Jimmy Sheirgill is. For once his struggle to make his character credible fails. Kumud Mishra, another actor we can always depend on, is also left trying to find a centre to his sketchy character. But Sunny Singh as a silly suitor is brilliant in a cameo. Just goes to show it’s not the size that matters.

Unabashedly dedicated to amplifying the central conflict in the love triangle featuring a middle-aged man, his newly-acquired girlfriend and his sensible wife, “De De Pyar De” creates an vivacious afterglow in its exploration of a dead marriage. The fire that Rakul Preet Singh’s booze-friendly bartender’s role kindles in the past-his-prime hero’s life may seem a little far-fetched. But director Akiv Ali works on making the relationship seem predestined rather than predesigned. You may wonder why any sane man would make a move away from a wife as focused and calming as Tabu. But you can’t judge the protagonist for his choices in life. 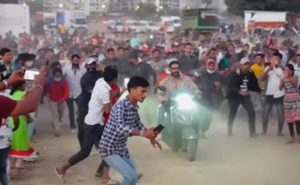 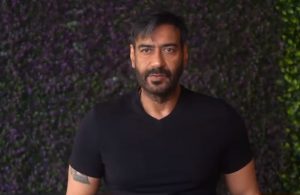