New Delhi: The Congress on Wednesday termed as “baseless” BJPs allegations against party chief Rahul Gandhi over alleged corruption in a Haryana land deal and also attacked the ruling party for dragging Priyanka Gandhi Vadras name, saying it was being done to divert attention from real issues concerning people.

Congress’ Communications Department incharge Randeep Singh Surjewala said the BJP was making false allegations in the wake of its “imminent defeat” in the 2019 general elections.

“Facing imminent defeat, a frustrated Prime Minister and his favourite minister Smriti Irani are resorting to labelling completely baseless and fake allegations in order to divert people’s attention from the issues of rampant unemployment, widespread corruption in Modi government, agrarian crisis, economy being in doll drums and wide spread social unrest that prevails,” he said.

He said Irani “has got so blinded by her desire for revenge against Rahul Gandhi along with her mentor that she is resorting to fake and false allegations as a diversionary tactic but they are never going to succeed”.

Surjewala said Rahul Gandhi purchased or 6.4 acres of land in Hassanpur village in Palwal in Haryana on March 3, 2008.

On July 26, 2012, Rahul Gandhi gifted 6.4 acres of land to Priyanka Gandhi through a registered gift deed and the relevant stamp duty was paid.

“So the entire allegation stands exposed,” he said.

About Irani’s allegations against Rahul Gandhi concerning the Rafale deal, he said UPA had shortlisted only Dassault Aviation for contract of 126 fighter jets and there was no question of any other firm being in picture.

“Once the Congress-led government had shortlisted only one company called Dassault Aviation, how does the Euro fighter come into the picture? So, actually, the entire edifies of the allegations falls to the ground on this duplicity,” he said.

Irani had attacked Rahul Gandhi by linking him with arms dealer Sanjay Bhandari and accusing him of working in the interest of his own family.

She had also alleged that Priyanka Gandhi was also involved in the land deals being investigated by probe agencies in Haryana and Rajasthan.

Irani said news reports have brought to the fore a relation between H.L. Pahwa, alleged to be on the payroll of C.C. Thampi, who is connected to both alleged arms dealer Sanjay Bhandari and Priyanka’s husband Robert Vadra.

“Gandhi (Rahul) has procured land from H.L. Pahwa through a conduit-representative Mahesh Nagar. Nagar also represented Vadra in land purchasing case under investigation in Haryana and Rajasthan,” she said.

She alleged that H.L. Pahwa had a similar give-and-take with Priyanka Gandhi as well. 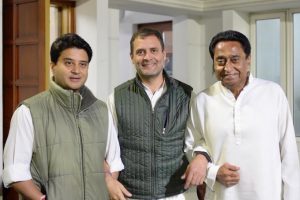