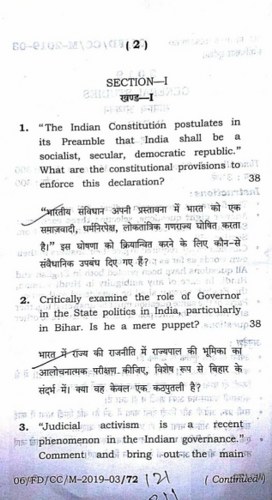 Patna:  The Bihar Public Service Commission (BPSC) on Tuesday apologised for a controversial question in a paper of its ongoing main examination that sought to know from civil service aspirants if the state Governor was “merely a puppet”.

The second question in the first part of the General Studies Paper II, held on Sunday, asked aspirants to “critically examine the role of the Governor in state politics, particularly in the context of Bihar. Is he merely a puppet?”

In a press note issued on Tuesday, the BPSC said it had blacklisted the person who set a erroneous question about a constitutional position in the first part of the General Studies Paper II. The BPSC said it apologised for its mistake.

State Education Minister Krishnanandan Prasad Verma even promised an inquiry into the error and said appropriate action will be taken against those who are found responsible for it.

According to aspirants, the paper had many such questions, based on their opinions and perceptions.

As the question created controversy, the BPSC’s Examination Controller Amarendra Kumar contended that such questions had been asked earlier too.

The BPSC’s 64th Main Examination began on July 12 and will end on July 16. Three papers have been held so far and on July 16, the examination in the optional subject will be held.