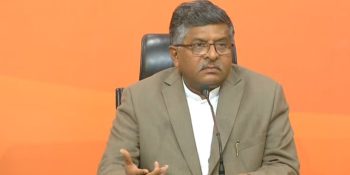 New Delhi : The Union Cabinet on Wednesday gave its nod to present a bill in the Parliament, proposing death sentence for rapists of children below the age of 12.

Union Law and Justice Minister Ravi Shankar Prasad told a media conference that the proposed bill, which amends the Protection of Children from Sexual Offences (Pocso) Act, will also include more drastic punishment for convicted rapists of girls below the age of 16.

The move comes in the wake of a nation-wide outrage over rape and murder of an eight-year-old girl in Jammu and Kashmir’s Kathua, and other instances in different parts of the country including rape of a nine-year-old girl in Gujarat’s Surat.

In case of gang-rape of a girl below 12 years, punishment will be imprisonment for rest of life or death sentence.

The minimum punishment in case of rape of women has been increased from rigorous imprisonment of seven years to 10 years, extendable to life imprisonment.

In case of rape of a girl under 16 years, minimum punishment has been increased from 10 years to 20 years, extendable to imprisonment for rest of life, which shall mean imprisonment till that person’s natural life.

The proposed bill also provides that court has to give notice of 15 days to Public Prosecutor and the representative of the victim before deciding bail applications in case of rape of a girl under 16 years of age.