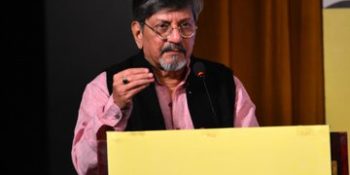 Mumbai | Veteran actor-director Amol Palekar was interrupted during a speech at an event at the National Gallery of Modern Art (NGMA) here when he criticised the government.

Palekar addressed the audience at the opening of an exhibition in memory of artist Prabhakar Barwe on Friday.

In his speech, Palekar expressed concern over policy changes that will give the Ministry of Culture at the Centre the sole right to decide the contents and themes of exhibitions to be held at the NGMA in Mumbai and Bengaluru.

“As of November 13, 2018, the artistes’ advisory committees operating at both regional centres, that is at Mumbai and Bangalore have been abolished, is what I have learnt. I am in the process of officially inquiring about the details so as to verify the hearsay,” he said.

The Govt is reaching new lows everyday!
Why has it become so intolerant against criticism? Criticism is the essence of democracy. Freedom of speech cannot be curbed pic.twitter.com/u3PW2Rou4s

“In 2017, we were happy to hear about the plan to open new NGMA branches at Kolkata and in the North East. News of the expansion of this Mumbai venue was also heartening. However on November 13, 2018, another disastrous decision was apparently taken namely, ‘all future exhibitions of artworks…,” he said before he was cut off by one of the event organisers, who asked him to stick to talk only about Barwe.

At this point, Palekar said he was reminded of how writer Nayantara Sahgal’s invitation to attend a Marathi literary event was withdrawn because her speech was “slightly critical of the situation around us”.

“Are we creating the same situation here?” he counter questioned on being stopped.

Palekar could not deliver the full speech he had prepared. 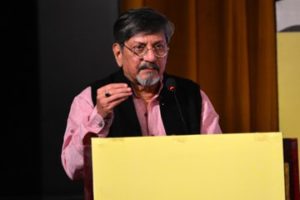