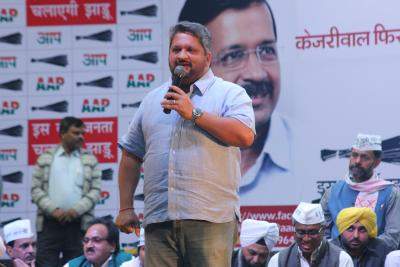 New Delhi: After being dropped by the Aam Aadmi Party from the candidate list for the Delhi Assembly elections, sitting MLA from Dwarka Adarsh Shastri, the grandson of Lal Bahadur Shastri, will join the Congress, said Delhi Pradesh Congress Committee chief Subhash Chopra.

He will be joining the party in the presence of Chopra, AICC in-charge P.C. Chacko and party spokesperson Mukesh Sharma.

Vinay Mishra had joined AAP on Monday and was given the ticket on Tuesday for the February 8 Assembly polls.

Earlier, sources close to Shastri told IANS that the list came as a “surprise” to him as he was told by party chief Arvind Kejriwal that he should continue the party campaign.

“He was told that he will recontest. The list came as a shock. The MLA was not in the loop about the process,” a source said.

Also, he was unhappy for being replaced by an “outsider”. “It would have been better to replace him with another party member and not an outsider if the party considered him incompetent,” said the source.

The MLA claimed he transformed the area and worked hard in the last five years for the constituency.

While the AAP has named all 70 candidates, the Congress is yet to do so.