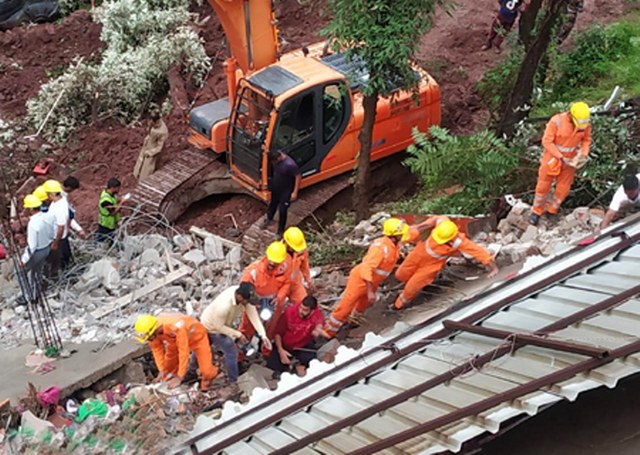 Shimla: A soldier and a civilian were killed and 11 other soldiers and seven civilians were still trapped after a four-storey building collapsed due to rain at Kumarhatti town of Himachal Pradesh on Sunday.

While 19 soldiers and five civilians were pulled out from the debris, the rescue operation by the National Disaster Response Force (NDRF), the Army and the state police is on.

An Army JCO declared dead was among those pulled out.

According to officials, the incident took place when soldiers, belonging to the Assam Rifles of nearby Dagshai Cantonment, were having their meal at a roadside eatery-cum-residential complex which caved in due to heavy rain.

Chief Minister Jai Ram Thakur, who is monitoring the operation from here, said 30 soldiers and seven civilians were present in the building, located on the Kumarhatti-Nahan road, around 55 kms from Shimla.

Deputy Commissioner K.C. Chaman said measures to rescue people trapped in the debris were on. The injured have been admitted to nearby hospitals.

Continuing rain was hampering the rescue operation, he added.

Around 11 Army personnel and seven civilians are still trapped.

(Headline of the story has been changed by EP Web Desk)