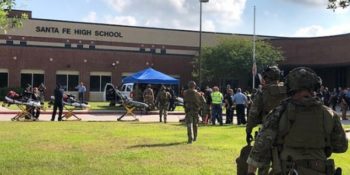 Texas :  Between eight and 10 people died in a school shooting on Friday in the southeastern Texas city of Santa Fe, a sheriff told the media.

“There are multiple fatalities that have been confirmed,” Gonzalez said, adding: “The number varies but it could be anywhere between eight and 10 fatalities at the school, including students and some adult staff as well.”

“There was also an injured Santa Fe ISD (Independent School District) police officer… that’s being treated at a hospital. I don’t know the extent of his injuries,” the sheriff said.

Gonzalez also told the reporters that one suspect was in custody and that a second “possible person of interest” also had been detained.

He said police were combing the school to make sure no additional students were injured or hiding and that no explosive devices were on the premises.

President Donald Trump commented on the shooting on Twitter. “School shooting in Texas. Early reports not looking good. God bless all!” he wrote.

Gun violence is a major political issue in the US.

Trump said in a speech at the National Rifle Association’s annual leadership meeting in Dallas, Texas, earlier this month that the Second Amendment to the US Constitution, which protects citizens’ right to bear arms, would never be “under siege” while he is president.

Speaking about a February mass shooting at a school in Parkland, Florida, that killed 17 people, Trump said the solution was to allow “highly trained teachers to carry concealed weapons” in the classroom.

The President also said then that making schools gun-free zones was an invitation to mentally disturbed people to “come in and take us”. 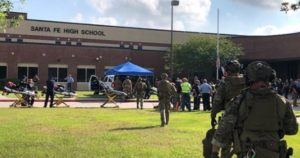