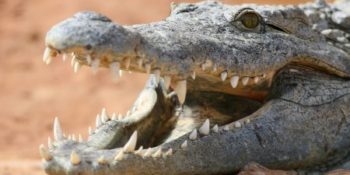 Belagavi (Karnataka) (2 MIN READ): A 10-feet long crocodile perched on the rooftop of a house in flood-hit Karnataka’s Raibag town has send the social media into a tizzy.

The reptile swept away by the swirling waters of the Krishna river in spate had landed on top of the asbestos roof of a fully submerged house about 90km north of Belagavi city, an official told IANS on Monday.

“The reptile was seen resting on the roof of Ajit Sutara’s house after water receded by a foot on Sunday when rain subsided,” state nodal officer Hallappa Pujari told IANS on phone.

#WATCH A crocodile lands on roof of a house in flood-affected Raybag taluk in Belgaum. #Karnataka (11.08.19) pic.twitter.com/wXbRRrx9kF

“As Sutar’s farmhouse is about one kilometre from the river bank, the crocodile sailed along in the direction of the house and held on to the sheet to remain on the rooftop for hours,” said revenue official Prashant Patil.

After rain water flooded and submerged all houses around the river bank, Sutar and his family had moved to higher and safer ground even as heavy rain continued to lashed the region all through the week.

“The crocodile later slipped into the water and disappeared in an hour as curious crowd approached it and made noise from all around,” said Deputy Tensildar Pujari.

It was Sutar who had spotted the male crocodile perched on his rooftop and alerted the police. A rescue team was also alerted.

“By the time, the rescue team could reach the spot, the reptile plunged into the receding waters and swam away,” added Patil.

But within that one hour the crocodile was the star attraction, as people fell over each other to photograph it and even make short videos. Armed with smart phones all these activities took place from a distance and was shared on the social media.

Luckily none took the plunge or pressed the animal for a TikTok video.

Torrential rains and strong surface winds from an active southwest monsoon have wreaked havoc in the coastal, central and northern regions of the southern state since a week, leaving a trail of death and destruction.