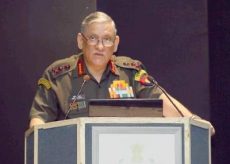 New Delhi: Four terror launch pads in Pakistan-occupied Kashmir (PoK) were hit and a number of terrorists killed in retaliatory artillery firing by India following the ceasefire violation by Pakistan in Jammu and Kashmir on Sunday, Army chief, General Bipin Rawat said. “We had information that terror camps are operating in PoK in areas opposite […] New Delhi (1 Min Read) : Reacting to Lt. General (retd) D.S. Hooda’s remarks who said too much hype had been created around surgical strikes, Army chief General Bipin Rawat on Saturday said it was his (Hooda’s) “individual perception”. “These are individual perceptions. Let’s not comment on them. Each one has his own perceptions on […]