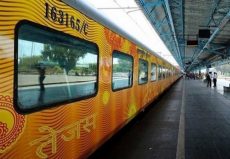 New Delhi: Hours after Finance Minister Nirmala Sitharaman said in her budget speech that Tejas Express would connect more tourist destinations, Railway Board Chairman V.K. Yadav said the third private train by the IRCTC would run between Indore and Varanasi. It is likely to begin operations by February 20. The Chairman said the new Indore-Varanasi Tejas […]

Lucknow: Passengers who travelled on the newly launched Tejas Express on Saturday will be paid a compensation of Rs 250 each as the train was delayed for about two hours in both the directions. There were about 451 passengers, who boarded the train from Lucknow, and another about 500 who took the train from New […] 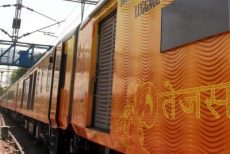 New Delhi: The Indian Railway Catering and Tourism Corporation (IRCTC) is planning to introduce a host of new services for its upcoming Delhi-Lucknow Tejas Express like luggage ferried from their homes to seats at a cost, even exclusive lounges to relax and also free rail travel insurance worth Rs 25 lakh. The IRCTC in a […]

Lucknow: The first train, operated by private players, to be run between Lucknow and Delhi will be the Tejas Express. The Railway Board is deliberating on a second such route, which too would be within the 500-km range. The Railways, despite protests from its unions, is going ahead with its 100-day agenda of handing over operations […]

New Delhi : The Indian Railways on Tuesday in its new time-table announced that it is all set to introduce more of its niche trains such as Antyodaya Express, Uday Express and Tejas Express in the next 12 months. According to the Railway Ministry’s new Trains at a Glance (TAG), the railway publication, it includes […]