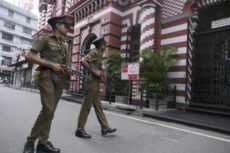 Colombo: The Islamic State (IS) terror group has claimed responsibility for an “ambush” carried out by three jihadis in Sri Lanka, saying that it caused 17 deaths after authorities in the island nation confirmed 16 dead in an operation in Kalmunai city. An Arabic language statement on the group’s official al-Amaq news agency on Saturday said […]