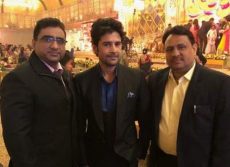 Mumbai:  “Pranaam” starring Rajiv Khandelwal will be out next month, and its first song is slated to be released on Wednesday, producer Rajnish Ram Puri said. After the super hit “Kaise Hua” from film “Kabir Singh”, Manoj Muntishir and Vishal Mishra have now composed another melodious song, “Sirf Tu”, depicting the romance between Rajiv and […]