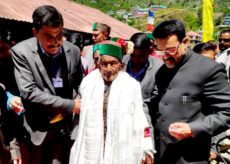 Kalpa: 1st voter of independent India, Shyam Saran Negi at a polling booth during the seventh and the last phase of 2019 Lok Sabha Elections in Kalpa, Kinnnaur, Himachal Pradesh on May 19, 2019. 103yr old Negi has been voting since 1st General Elections 1951. (Photo: IANS)

Shimla: Shyam Saran Negi, a 102-year-old voter who also participated in the 1951-52 general elections which were the country’s first, cast his ballot on Sunday at a picturesque hamlet in Kinnaur district as elections were held to elect four members of Parliament from Himachal. “I have never missed an opportunity to vote,” Negi told reporters in […]