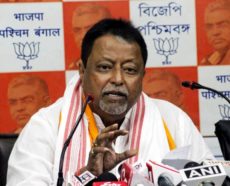 Kolkata: A day after suffering reverses in the Lok Sabha battle, West Bengal’s ruling Trinamool Congress on Friday suspended its MLA and BJP leader Mukul Roy’s son Shubhrangshu Roy for six years alleging that he was “demeaning the party”. The party cracked the whip hours after Roy junior expressed doubts over whether his party had […]