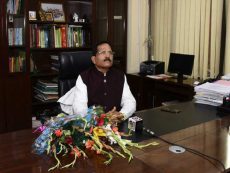 Panaji: Minister of State for Defence and North Goa MP Shripad Naik has been admitted to a hospital in north Karnataka after his car met with an accident. Bharatiya Janata Party national general secretary C.T. Ravi said in a tweet that Naik’s wife, Vijaya, who was travelling with him, has succumbed to the injuries she sustained […]