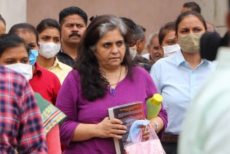 Ahmedabad | The Gujarat Special Investigation Team (SIT) has filed a chargesheet against activist Teesta Setalvad, former Gujarat Director General of Police R.B. Sreekumar and former IPS officer Sanjiv Bhatt. The Gujarat government had constituted the SIT to investigate the conspiracy allegedly hatched by Teesta and two others to implicate the then Chief Minister and other […] Palanpur (Gujarat) :  A court here on Thursday rejected the Gujarat Police plea seeking remand of former IPS officer Sanjiv Bhatt and sent him to judicial custody in connection with a 22-year-old case of alleged planting of drugs to arrest a man. The Criminal Investigation Department (CID) of the police had picked up Bhatt and […]

Ahmedabad :  The CID Crime Branch of Gujarat Police on Wednesday arrested dismissed IPS officer Sanjiv Bhatt in a 1996 case relating to falsely framing a lawyer in a narcotics peddling case. The CID picked up Bhatt and seven others, including two former police officers, following directives from the Gujarat High Court. “Sanjiv Bhatt was […]