Dharamsala | Amid the rising tension between Russia and Ukraine, a Russia-origin Israeli has tied the knot in Hindu traditions with his Ukrainian girlfriend in this Himachal Pradesh hill town that is the abode of Tibetan spiritual leader The Dalai Lama. Russian national Sergei Novikov, who has been staying here for over a year, married his […] 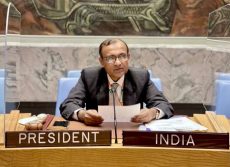 United Nations | India abstained on a General Assembly resolution that was passed on Thursday suspending Russia from the UN Human Rights Council. Permanent Representative T.S. Tirumurti said after the vote: “If India has chosen any side, it is the side of peace and it is for an immediate end to violence.” He said of the […] 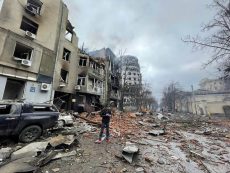 Lviv | Women across Ukraine are grappling with the threat of rape as a weapon of war with growing evidence of sexual violence emerging from areas retaken from retreating Russian forces, The Guardian reported. The world was horrified on Sunday by a picture taken by Mikhail Palinchak on a highway 20 km outside Kiev, in which […]

Kiev | The Centre for Counteracting Disinformation of the National Security and Defence Council of Ukraine has warned of possible chemical attacks being prepared by the Russian forces. “Russian channels tell their audience daily about mythical laboratories that allegedly create chemical weapons in Ukraine.” “This is how the enemy ‘grooms’ the population of the Russian Federation […]

Moscow | Russian soldiers captured by a Ukrainian volunteer medic unit will all be castrated, its founder and commander declared on Ukraine’s national television. The combat medic, whose volunteer team has been described as “medical angels” by the Western media, said “cockroaches” don’t deserve the right to procreate, RT reported. The shocking declaration came from Gennadiy […] 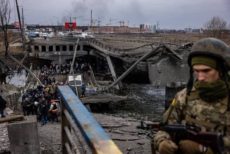 London/Kiev | Russian forces are raping and hanging women who are unable to escape their savage invasion, Ukrainian MPs have claimed, Daily Mail reported. Lesia Vasylenko, an MP for Ukraine’s opposition Holos party, said some women over 60 had committed suicide after being accused by Putin’s forces to stop the horrific attacks, the report said. […]

The Hague | Russia must immediately suspend military operations in Ukraine, the UN International Court of Justice (ICJ) ruled, marking the first verdict handed down by the world court since Moscow began its invasion of Kiev on February 24. By a vote of 13 to two, with Vice-President Kirill Gevorgian of Russia and Judge Xue […]

Kiev | Recruitment centres for mercenaries have been opened in Syria, where over a thousand people have been recruited in recent days and about 400 people have already arrived in Russia, according to the General Staff of the Ukrainian armed forces. Camps have been set up near the Ukrainian border in Russia’s Rostov and Gomel regions […]

Kiev | A pregnant woman who was injured during the Russian shelling of a maternity hospital in Ukraine’s Mariupol city on March 10, has died, which increased the overall fatalities in the attack to four, a media report said citing a journalist as saying. The Ukayinska Pravda newspaper quoted Voice of America journalist Asya Dolina as […]