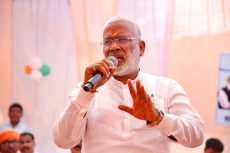 Lucknow | Uttar Pradesh BJP state president and minister for Jal Shakti Swatantra Dev Singh has resigned as leader of Legislative Council. Sources said that he had resigned from the post, citing pre-occupation with his ministerial duties. The office of the principal secretary of the Legislative Council also confirmed it. Deputy chief minister Keshav Maurya will […]

Lucknow:  An FIR has been registered against Congress leaders Sudhanshu Bajpai and Lalu Kannaujia for putting up posters against the BJP leaders, including Chief Minister Yogi Adityanath. The FIRs have been lodged by the police at Hazratganj and Hasanganj police stations. Some unnamed persons and the printer of the posters have also been named in […]