Chandigarh: A day after the attack on Gurdwara Nankana Sahib in Pakistan, the Shiromani Gurdwara Parbandhak Committee (SGPC) on Saturday announced to send a four-member panel to visit there to take stock of the situation. Condemning the incident, SGPC President Gobind Singh Longowal appealed to the Pakistani government to take strict action against the culprits. Besides […] 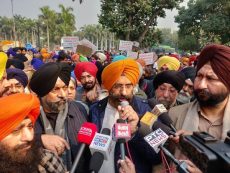 People of Sikh community hit the streets at Delhi’s Teen Murti Marg on Saturday against the attack on Gurdwara Nankana Sahib by a mob in Pakistan on Friday (Photo: [email protected])

New Delhi: Members of the Sikh community hit the streets at Delhi’s Teen Murti Marg on Saturday against the attack on Gurdwara Nankana Sahib by a mob while devotees were stuck inside the shrine. The protest was called by the Akali Dal and was led by its spokesperson and Delhi Sikh Gurdwara Parbandhak Committee Manjinder […]

New Delhi/Islamabad: The attack on the Nankana Sahib Gurdwara, the birthplace of Guru Nanak, in Pakistan has triggered protests among Sikhs in India. While several Sikh groups were to protest outside Pakistan High Commissioner in New Delhi on Saturday to condemn the attack, Akali Dal leader Sukhbir Singh Badal has asked Prime Minister Narendra Modi to […]

Lahore: Twitter users on Friday reacted with concern and a sense of urgency after a tweet that hundreds of agitated Muslim residents of Nankana Sahib had allegedly pelted Gurdwara Nankana Sahib with stones. Video clips doing the rounds on the social media claimed the mob was led by the family of a youth, Mohammad Hassan, who […]