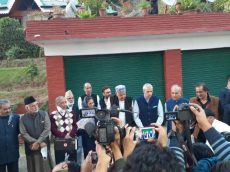 Srinagar: Mainstream Kashmir parties, who are signatories to the Gupkar Declaration, have formed an alliance to seek reversal of the constitutional changes in Jammu and Kashmir made on August 5, 2019, National Conference President Farooq Abdullah announced on Thursday. The announcement of the People’s Alliance For Gupkar Declaration was made after the signatories met at Abdullah’s […]