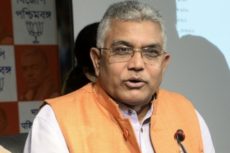 Kolkata:  A man, who claimed to be a personal assistant to BJP’s West Bengal unit chief Dilip Ghosh, was arrested along with an accomplice after Rs 1 crore of unaccounted money was seized from them in Asansol station on Monday, Railway Police sources said. The duo were apprehended by the Railway Police along with a […]