Brisbane: The Australian media on Wednesday hailed Team India’s historic Test win at the Gabba, terming the Border-Gavaskar series win as one “for the ages”. A depleted Indian team, under the captaincy of Ajinkya Rahane, beat Australia by three wickets in the series-deciding fourth Test, a month after the Adelaide debacle where the visitors were bundled […] 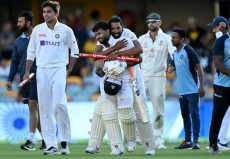 Brisbane: India on Tuesday became the first team to beat Australia at The Gabba in over 32 years when they defeated the hosts by three wickets in the fourth and final Test and clinched the Border-Gavaskar Trophy 2-1. Chasing 328, India achieved the target in 97 overs with Rishabh Pant remaining unbeaten on 89. Shubman Gill […]