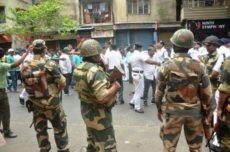 Kolkata: Amid ransacking of vehicles and pelting of stones, one police officer and two civic volunteers were injured in a clash between workers of Bharatiya Janata Party and police in West Bengal’s South Dinajpur district, after cops allegedly stopped a rally of the saffron party. The BJP accused the police of provoking their supporters and […]

Vijayawada : Tension prevailed at Gannavaram Airport here on Wednesday as BJP workers tried to attack Telugu actor Sivaji, who has been criticising the party for denying special category status to Andhra Pradesh. Activists of BJP stopped and mobbed the actor, with some of them hurling abuses at him for his allegations against the party […]