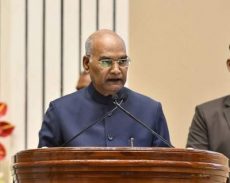 New Delhi: The new Arms (Amendment) Act has come into force with President Ram Nath Kovind’s assent to a Bill cleared by Parliament earlier this week to help the government in controlling proliferation of illegal arms and ammunition in the country. Kovind gave his approval on Saturday to the Act which provides for enhancement of period […]