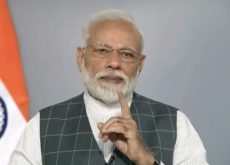 New Delhi: India on Wednesday became “a space superpower” by becoming the fourth country to acquire anti-satellite capability, Prime Minister Narendra Modi announced on Wednesday, calling it “a proud moment”. “Our scientists, a little while ago, have targeted a live satellite in space 300 km away in low earth orbit,” he said in a nationally televised […]