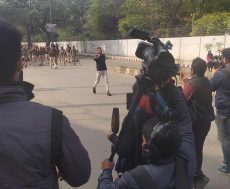 New Delhi: A student of Jamia Millia Islamia was injured after an unidentified man opened fire at the anti-CAA march conducted by Jamia Coordination Committee. The attacker was apprehended by the police and the victim was admitted to a hospital. According to witnesses, an unidentifed man was seen raising religious slogans before he opened fire […]