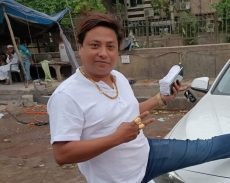 Kolkata | A picture of Ansar Sheikh, one of the prime accused in the case related to the communal violence in Delhi’s Jahangirpuri on April 16, has surfaced, where Sheikh could be seen sitting next to Sheikh Ajijul Rahman, a Trinamool Congress councillor from the Haldia Municipality in East Midnapore district of West Bengal. After Ansar […]