Screengrab from video uploaded by CEAT Tyres on You Tube

Bengaluru | Bharatiya Janata Party MP from Karnataka, Anantkumar Hegde has shot off a letter to tyre major Ceat objecting to its recent advertisement on bursting crackers. He hoped that in future Ceat will respect the feelings of Hindus and will not hurt them as such advertisements are creating unrest among Hindus. In a letter written […] 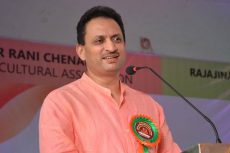