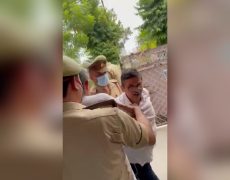 Lucknow | Retired IPS officer Amitabh Thakur has been arrested by the Lucknow police on the basis of an SIT report which found him prima facie guilty of conspiring to save BSP MP Atul Rai, who is an accused in a rape case. The alleged rape victim had died earlier this week, days after she attempted […]