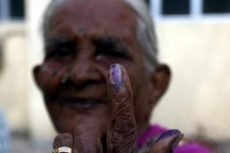 Siliguri:  Over 65 per cent of the electorate cast their votes in the three northern West Bengal constituencies in the second phase of the Lok Sabha elections on Thursday, amid several incidents of violence including an attack on a CPI-M candidate and the smashing of an EVM. Till 3 p.m., the overall polling percentage was […]