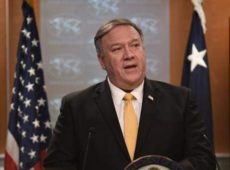 Washington/United Nations: The designation of Jaish-e-Mohammad (JeM) chief Masood Azhar as a global terrorist by the UN Security Council is a “victory for American diplomacy”, US Secretary of State Mike Pompeo said on Thursday. “Congrats to our team @USUN for their work in negotiating JEM’s Masood Azhar’s #UN designation as a terrorist. This long-awaited action […] New York : America’s oldest World War II veteran and the oldest man in the country, Richard Overton, has died. He was 112, his family said. He died on Thursday, the CNN reported. He was hospitalised with pneumonia, his family member Shirley Overton said. Richard Overton volunteered for the Army in 1942 and served with […]