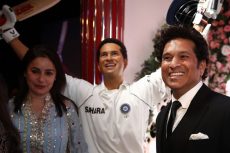 London: Legendary Indian batsman Sachin Tendulkar has been inducted into the ICC Hall of Fame, alongside retired South Africa pacer Allan Donald and former Australia woman fast bowler Cathryn Fatzprick. Tendulkar, who retired in November 2013, tallied 15,921 runs in Tests and 18,426 in ODIs, both of which remain records. He is the sixth Indian to […]