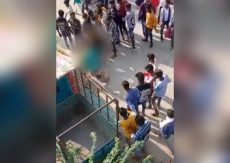 Screengrab from video shared by several users on Twitter

Bhopal | Two tribal women were sexualy assaulted by a group of men in a village in Madhya Pradesh’ tribal Alirajpur district, police said on Sunday, adding that two accused have been arrested in connection with the crime. The incident came to light after a shocking video surfaced on social media, showing the two women, standing […]