Mumbai | It’s been barely a few days after his much hyped wedding with ‘Dear Zindagi’ star Alia Bhatt, and Ranbir Kapoor is already back to work to fulfil his professional commitments. The actor was recently spotted in the Andheri area of Mumbai where he was seen sporting a blue plaid shirt and beige pants. Alia […] 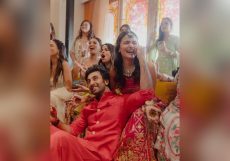 Mumbai | Alia Bhatt and Ranbir Kapoor’s wedding celebration fever refuses to fade out. The couple may have tied the knot on April 14, but the nation is still very much tailing after every bit of information and content piece from the biggest wedding of the year. Serving a treat to her followers, Alia shared a […]

Mumbai | The layers of celebration of the much hyped wedding of Alia Bhatt and Ranbir Kapoor are unravelling slowly as after Alia’s mehendi pictures, the newly surfaced pictures show Mahesh Bhatt hugging his son-in-law Ranbir Kapoor. Alia’s half sister Pooja Bhatt, took to her Instagram and shared two adorable pictures of the two gentlemen […] 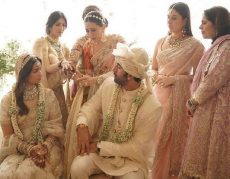 Mumbai | The excitement over Ranbir Kapoor and Alia Bhatt’s wedding continues even as the newly-wed couple are said to be all set for their honeymoon in South Africa. After the first wedding pictures shared by Alia on her Instagram, now new pictures from their ‘gathbandhan’ ceremony have taken the Internet by storm. Gathbandhan is a […] 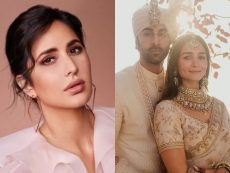 Mumbai | Star couple Ranbir Kapoor and Alia Bhatt tied the nuptial knot on Thursday and the entire B-Town erupted in celebrations. Among the celebrations, the early wishes came from Ranbir’s ex-flame Katrina Kaif, who extended her best wishes to the newly-wed couple through her social media. Katrina took to her Instagram and posted the picture […]

Mumbai | Not long after Alia Bhatt and Ranbir Kapoor officially became Mrs and Mr Kapoor, and once the no-fuss ceremonies got over, Alia shared a bunch of dream-like pictures of the couple on her social media. Taking to her Instagram, Alia posted a series of pictures with Ranbir, who’s seen sporting a well-developed beard. She […] Mumbai | The most awaited wedding of the year has attained its pinnacle as Ranbir Kapoor and Alia Bhatt are now officially married. The star couple exchanged wedding vows at Ranbir’s Vastu residence in Pali Hill area of Mumbai. The intimate wedding was done in the presence of family members and close friends. The star couple, […]

Mumbai | Alia Bhatt has been dodging questions regarding her plans to get married to Ranbir Kapoor, after posting an adorable picture of the two together on Diwali and getting fans all excited. The actress uploaded a video on her YouTube channel documenting a regular day in her life. It starts with the actress driving to […] Jaipur | Bollywood star Ranbir Kapoor celebrated his 39th birthday at a beautiful resort near Jawai Dam in Rajasthan’s Pali district along with his rumoured girlfriend Alia Bhatt. Bhatt, in fact, posted the picture of the venue sitting on the banks of the dam and wrote “Happy birthday My Life.” Alia’s mother Soni Razdaan also joined […]