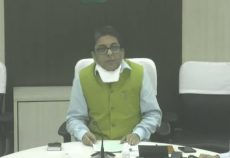 Kolkata | Alapan Bandopadhyay, the former Chief Secretary of West Bengal who’s presently the advisor to Chief Minister Mamata Banerjee, has landed in fresh trouble after the Centre on Monday initiated penalty proceedings against him for his alleged ‘misconduct’ and ‘misbehaviour’. In a memorandum sent by the Department of Personnel and Training (DoPT), the Centre has […]

Kolkata | In a late evening development on Thursday, former West Bengal Chief Secretary Alapan Bandyopadhyay replied to the show-cause letter sent to him on the ground that he refused to comply with the lawful directions of the Central government, violating Section 51 (b) of the Disaster Management Act, 2005. The letter was sent to Bandyopadhyay, […]